See you in April: A Month of Action for Bomani Shakur


Revolutionary Abolitionist Movement is inviting you to participate in a month of solidarity actions for Bomani Shakur (Keith Lamar). 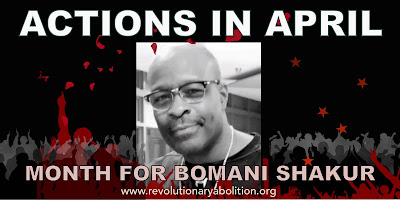 This April, 2020, we invite you to participate in a month of actions and events for comrade Bomani Shakur.

Bomani Shakur has been showering our world with beautiful gifts. His words and actions haven’t missed a beat in elevating those he knows and even those he has never met. Shakur is best known for the 1993 Lucasvile Uprising, a rebellion inside the walls of an Ohio prison against tyranny and harsh conditions.

In the aftermath Bomani was falsely accused of having murdered prisoners and having “led a death squad.” No physical evidence connects him to the murders that took place when the prison in Lucasville was in uprising. The verdict itself only came about due to a forced testimony by a prisoner turned snitch. In 2004 Bomani wrote a book called Condemned, to highlight his life and the truth about what happened. Prisoners organizing, confronting their oppressor and the organizers being attacked by the state as retaliation is nothing new. In 1971 prisoners in San Quentin, California revolted, George Jackson was killed and Hugo Pinell would spend the following 44 years in California’s harshest prisons only to be stabbed to death in 2015 by white supremacists. It’s important to recognize that prisoners stand up, organize and are attacked by the state for it. In response, the prisoner strikes back by persevering, surviving and continuing to build with fellow prisoners and those of us on this side of the wall.

As we see with letters, articles or the book Bomani wrote, the message carried by his words have touched people inside and out and spread far. How could a man sitting on death row, his execution date only three years away, be the source of so much kindness and inspiration?

It is because, as he says, this situation is much bigger than him. This is about the entire movement.

It is about how we come together, learn how to work together, and prepare to unseat those in power who are running the most efficient life destroying machine: the prison system.

He is clear how this works on his end: he’s not interested in allowing others to characterize him as unsuccessful, as a victim. He doesn’t want activists crowding around, showing pity. It is not for them to decide who he is and if he is successful. Success has already begun the day you decide to get up and do something about the situation. He is looking for collaborators, people who understand and want to struggle together.

This is where we come in. The fact that the state has set Bomani Shakur’s date of execution is not a moment of tragedy or for despair, but a moment to build from, and to be moved to action.
This is how we follow his excellent example and this is how we turn this situation against the state. Their system thrives off despair. We will build our bonds of solidarity, lines of communication, respectful dialogue, and comradely exchange. We will amplify the words of Bomani Shakur, and become an impenetrable and irretractable force; a force for life, a force for comradeship. We will be as kind and accepting to our comrades and those hunted by the state, as we are dangerous to and unrelenting against the prisons.

We begin with April: a month of solidarity actions with Bomani. Please join in this initiative by: holding a letter writing event, screening the movie about the Lucasville uprising, putting up posters, posting about it on social media, hanging banners, inviting Bomani to do a call-in event with you and your comrades, or any other action or event that raises his profile and builds the kind of movement that is a reflection of his steadfastness and generosity.

April is the anniversary month of the Lucasville prison uprising: a powerful decision to stand up and reclaim a life of dignity and an example of the power of unity among prisoners. This month is to raise awareness about Bomani and his contributions, and by doing so, to build stronger connections with one another, and with comrades inside.

Join together with us and carry forward Bomani’s strength and spirit!

From your comrades in 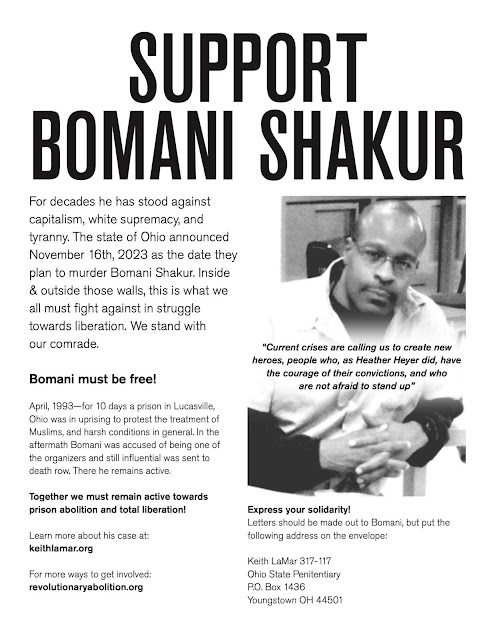