2020 Goal: Greg Curry Needs an Attorney that will Fight for Freedom 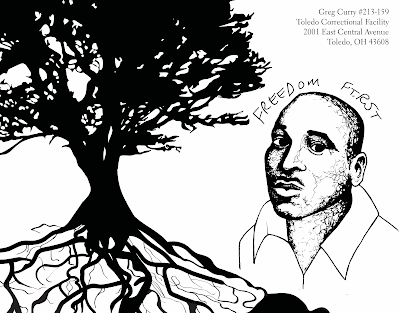 I am a friend of Greg Curry, a Lucasville Uprising prisoner who is incarcerated at Toledo Correctional Facility in OH.  Greg is looking to connect with a civil rights attorney that will represent him or give him legal advice, in his fight for freedom.  Finding an attorney to overturn Greg's convictions will serve the important political purpose of building momentum towards amnesty/clemency for all Lucasville Uprising prisoners.

While being part of a prisoner advocacy group in Pittsburgh for the last 3 years, I visited and corresponded with some of the Lucasville Uprising survivors incarcerated in OH and got involved in the Lucasville Amnesty campaign.  If you're not familiar with that case, there was an uprising at Southern OH Correctional Facility (aka Lucasville) in 1993 that was sparked from horrendously inhumane prison conditions at the state prison.  The uprising resulted in the death of a correctional officer and nine prisoners. The investigation and trial were flagrantly flawed and relied on snitch testimony, which resulted in five innocent people on death row and others with life sentences.  A documentary on the case, The Shadow of Lucasville, is available on YouTube for more background.
One of those folks who received a life sentence is Greg Curry. In 2018, after 20 years of solitary confinement, Greg was transferred out of the supermax Ohio State Prison.  His supporters helped him win the transfer to Toledo Correctional Facility, which was a huge victory.  We want to keep the momentum going. Greg needs legal representation that will help him overturn the false convictions. Unlike the death row defendants, Greg has not been entitled to a state appointed attorney.  At Toledo Correctional, he has finally been able to access a law library, and would love to discuss his research with an attorney.
His conviction should be easy to overturn, as prosecutors admitted to misconduct on appeal.  It's been difficult to find attorneys in OH that will pick up the case, because the case was so politically volatile.  Also, Greg has two simultaneous convictions for defending himself against the staff who targeted him because of the uprising. The Innocence Project said his case was very good and were ready to take it, until they learned that these other convictions would prevent Greg’s release even if they won.

Finding an attorney to overturn Greg's convictions will serve the important political purpose of building momentum towards amnesty/clemency for all Lucasville Uprising prisoners.  Amnesty would also demand the dismissal of Greg's self defense convictions.  Bomani Shakur (Keith LaMar), one of the death row prisoners, recently received his execution date for November 16, 2023. Time is limited to raise the profile of the Lucasville case and push for amnesty before the ODRC claims lives.

Alice and Staughton Lynd, renowned labor organizers and prisoner advocates, have been assisting Greg and other Lucasville Uprising prisoners with their cases and helping them battle the retaliation they have faced for decades now.  They have years' worth of research on the case, but being in their old age, they are looking for other attorneys onto which they could pass their knowledge. They would be a valuable resource for any interested attorney looking to take on Greg's case.

Greg uses his website and social media platform to advocate for other prisoners and causes he cares about.  Please post this request for legal assistance on your social media and send emails out to your networks to help get the word out for Greg.  Any recommendations for attorney offices or legal advocates would be much appreciated.  You can also post about Greg's zine, Repression Breeds Resistance, so readers can hear his story in his own words.  Funds are being raised for Greg's legal representation.