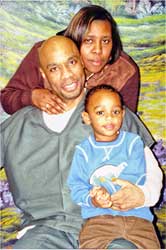 Lucasville uprising survivor Derek Cannon has again been target of harassment by staff at OSP.

Please write Derek a letter of support at:

Here's his story about recent incidents...

Hello and how are you doing? First and foremost, "thank you" for your time, concern and offer of support!

Honestly I don't know what to do, I'm at witts end. It's like, I'm very clear on what I'm up against, but don't really know how nor have the resources to fight it.

These people (OSP admin) objective is to put as many fake tickets on me as possible to paint an unfavorable picture of me to justify keeping me here at OSP for the duration.

Case in point, this recent incident that could have gotten out of hand had I not been on my toes. The CO purposely tried to bait me; to go to recreation, I turned around to be searched / patted down, but the CO yelled "turn around, turn around, so I began to turn around, but then the CO grabbed my shoulder and turned me back towards the way I was previously facing.

He pat me down kind of aggressive and tell me I'm good to go to rec, as I am walking away, I ask the CO, what is that all about. His exact words were, "I wanted you to do something, why you didn't do nothing?" My response: I point to my head and say 'cause I'm smarter than that!'

While at rec, and after some thought, 45 min to an hour later, I report the incident to the block Lt. Suprisingly 20 minutes later I was put in the hole, given a ticket, and found guilty. I was told, had I not reported it, I would not have got a ticket, or put in the hole! In other words--keep my mouth shut!


Derek's wife and other close supporters responded to the situation and he's been released from the hole, but there's a strong likelihood that incidents like this will continue to occur, so letters from outside can help, both in keeping his peace of mind, and letting OSP staff know that he's not without support, which deters this kind of targeting.

Also, please read other posts from and about Derek. He is in a similar situation to Greg Curry, serving life without parole on very flimsy evidence. Unlike death sentenced people, he doesn't get court-appointed representation on appeals, so even though his case should be easily overturned, he's stuck. Legal assistance and more dedicated supporters would make a huge difference in his case, which would have ripple effects benefiting all the Lucasville Uprising prisoners.
at 3:20 PM