Greg Curry in Solidarity with the Vaughn 17 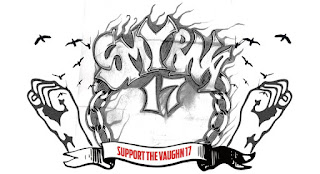 On Monday the Vaughn 17 trials began, sending the first 4 defendants to trial. Like Lucasville, the state is relying entirely on informant testimony, underfunding defense lawyers and improperly witholding evidence. Two of the four starting trial this week kicked their court appointed attorneys off and are defending themselves.
Unlike Lucasville, there's active public support and solidarity with the prisoners, rather than petitions calling for their executions.

Greg wrote the following statement in solidarity with the defendants.

My clenched fist salute to the brothaz known as the Vaughn 17!

I personally know how you felt leading up to the day you made demands to be treated like human beings, I know the state’s abusive response, I know the journey you will face in the weeks to come as your trials begin, with attorneys underpaid, unprepared, and unenthused.

I know what it's like to be skeptical of the criminal justice system and have the skepticism proven true at the cost of your personal liberty. I'd recommend you enter as much as you can onto the court record even over your attorneys objection for future appeals.

Trust that you’re on the right side of history. That’s your armor. The system can't give you victory you must take it!!

Continue to fight, continue to demand human rights so the next Attica, Lucasville, or Vaughn won't be necessary.

Thats how we win!