When the supermax opened in 1996, Staughton and Alice Lynd worked with a handful of prisoners to sue the facility. They won, and forced many conditions to improve. Since then the ODRC has been required to make changes to leave policies and conditions "at a minimum be comparable to the policy & procedures approved by the Supreme Court in Wilkerson v. Austin".

There are a number of very distinctive differences, Greg has outlined for the record, that make his conditions of confinement unlike those of other general population prisoners. He says these differences "amount to nothing more than cruel & unusual punishment and harassment."

One important part of the decision in Austin v Wilkerson is that all but the highest security level prisoners (including death-sentenced Lucasville Uprising prisoners) must voluntarily accept being housed in the "atypical conditions" of the supermax by signing a waiver. Greg did not sign the waiver, but the ODRC holds him at OSP indefinitely.

"For most prisoners this maybe a temporary condition," he said, "for me this is over 20 years of like treatment, my body nor my mind can separate any of this and since the courts has already ruled on this subject at this prison, these violations are deliberate indifference." 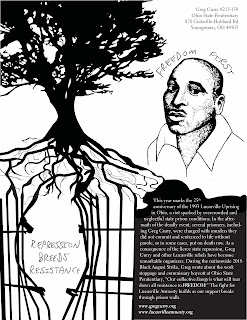 Greg is looking for lawyers to work on a civil suit with him against this special treatment. He says he's seeking "50K per day I'm held here in a lawsuit against this unlawful treatment." Please help Greg find legal assistance by sharing this post, printing and distributing the new poster and donating to his fundraiser.

You can also read more about Greg on his website, or write to him directly at: