Greg Curry intended to make this statement at the recent pig roast solidarity event in Central Ohio, but was unable to connect with organizers at that time. Instead we're printing it here.

Today I'd like to give you a mental picture of how Ohio's supermax is set up so that the context of what follow will make sense. There is severely limited movement here its 4 blocks: A, B, C, D. A & B are on top of each other C & D are on the other side of the prison on top of each other. In each block there is 8 pods each of those pods hold up to 16 people. Each pod is isolated from the next so much so you may never see them even though its just a door/wall between y'all. Likewise, the blocks are even more cut off since its a floor between A & B then 1/2 a football field between the other side of the prison where C & D blocks are similarly set up. There is actually only one / two jobs per pod. This is the backdrop for which any organizing would take place within these walls.

However we do have successes, usually its some situation brought on by repressive cops armed with oppressive rules drawing a response that temporarily disrupt operations around here . For Black August one of my closest Comrades, Siddique Hasan is accused of organizing Statewide action against the orderly operations of prisons. In the process, this Comrade was placed in the hole, stripped of his personal property and his access to communicate is severely cut back.

Of course he continue to lead, to deeply care about justice for us all even as he fight for justice to keep the State from murdering him. Some of you know the prison rules was twisted up just to find that Hasan broke any rule. He did 3 weeks on hunger strike while many of you made calls demanding fairness.

HASAN & I appreciate you. Our collective Energy is what will tear down all resistance to FREEDOM!

As for the events inside of this prison with all attempts to FREE people you first have to wake them up to their condition. In the process of doing that late in July the cops was being overly aggressive writing prisoners up for minor stuff just to put them on restrictions. In my pod I noticed the frustration & started sharing reading material, even with the Trump supporting white supremacists, about the value of of their labor about Black August.

Events across the country and how just by refusing to continue to work for cops that treat them so bad that they could make a difference. Because I have a reputation for being solid and my actions speak for themselves all over Ohio Prisons people began to say let's do this right here, right now. 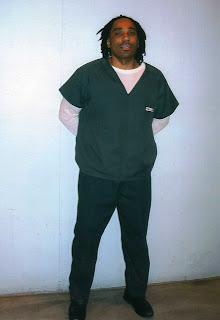 Of course there was a number of SUPER JANITORS the cops knew they could count on for information & work. These guys was excluded from any idea sharing and as the cops put pressure on them for info and work equally, the pressure was put on them by prisoners to stay out the way of this protest. READ INTO THAT WHAT YOU WISH! As this strike took place ahead of the nationally planned Black August dates but for 3 weeks this strike was every bit Black August inspired and I hope we made all our comrades past and present Proud.

That pod was shut down, the administration wanted to hear OUR concerns, no one crossed he Pickett line, and although I was put in the hole, and LOST personal property the whole pod was relocated to bust the spirit!!! Here now several of us did 3 day fast while refusing to spend money with commissary during the national protest. I have heard in other parts of this prison there is also hunger strikes / commissary boycotts but I can't confirm this due to the insulation of each section.

In closing I speak for myself and I'm sure Hasan would agree, we need y'all out there we need all that energy aimed at a time when 3 weeks in August Injustice has a moment and the rest of the year justice prevail for Black folks, for immigrants, for Women, for living wages, for the environment, for the poor, for LGBTQ. At this moment in time it has been placed upon us to move humanity forward. Let's get it done. I'd like to ask you all a small favor tonight. Sign a post card or email to the SAN FRANCISCO BAYVIEW tell them thank you for participating in the liberation of us trapped inside.


Greg's Birthday is coming up on September 26, he's asking people to make Tshirts that say "Free Greg Curry" on them, with "GregCurry.org" on the back and send photos of yourself wearing it to his Facebook page.