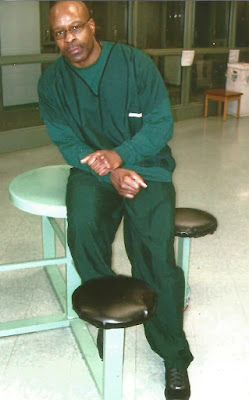 “An execution date should not be scheduled because Mr LaMar’s death sentence is precisely the sort identified by the Joint Task Force to Review the Administration of Ohio’s Death Penalty. Mr LaMar’s conviction rests on prisoner testimony which is not independently corroborated; there is no physical or video evidence linking him to the crimes and he has always maintained his innocence. Evidence supporting Mr LaMar’s innocence is slowly coming to light after dogged efforts to unearth such proof following years of suppression.” -excerpt from motion.

Keith LaMar’s attorneys filed this response to prosecutor Mark Piepmeier’s motion requesting an execution date. Piepmeier was lead attorney on the Lucasville Uprising cases, and largely responsible for egregious misconduct and deal-making that secured these convictions based on informant testimony and withheld evidence. He has a documented pattern of doing the same to other defendants.

The response starts by pointing out ways that Keith’s case fits within recommendations made by the joint task force on death penalty cases, specifically: relying on uncorroborated snitch testimony, disproportionately targeting black people, and relying on evidence improperly withheld at trial. It goes on to detail that withheld evidence, including statements by trial witnesses and others that could easily cast reasonable doubt if not fully exonerate Keith if he were afforded a new trial.
Read »
at 11:23 AM No comments:

Not only did the authorities inhibit media contact during the uprising, they rigidly followed the same policy until summer 2017. In their answer to a complaint filed in a lawsuit by a number of prisoners and reporters, the authorities repeatedly admitted

"that they and their predecessors have consistently denied all members of the press face-to-face media access to any prisoner convicted of crimes committed during the April 1993 Lucasville riot . . . .6"

The Court ruled that face-to-face media access cannot be denied based upon the anticipated content of the interview, nor because of the possible impact on victims or their families. In mid-July 2017, the Ohio Department of Rehabilitation and Correction modified its media policies accordingly.7 This action for the first time opened up access to at least some of the surviving prisoner protagonists by newspaper, radio, and TV reporters.


If any reporter or journalist wants to move on this win in the courts, please read the rest of this article and contact us at insurgent.ben [at] gmail [dot] com and we will help you go about requesting interviews.

Greg Curry intended to make this statement at the recent pig roast solidarity event in Central Ohio, but was unable to connect with organizers at that time. Instead we're printing it here.

Today I'd like to give you a mental picture of how Ohio's supermax is set up so that the context of what follow will make sense. There is severely limited movement here its 4 blocks: A, B, C, D. A & B are on top of each other C & D are on the other side of the prison on top of each other. In each block there is 8 pods each of those pods hold up to 16 people. Each pod is isolated from the next so much so you may never see them even though its just a door/wall between y'all. Likewise, the blocks are even more cut off since its a floor between A & B then 1/2 a football field between the other side of the prison where C & D blocks are similarly set up. There is actually only one / two jobs per pod. This is the backdrop for which any organizing would take place within these walls.

However we do have successes, usually its some situation brought on by repressive cops armed with oppressive rules drawing a response that temporarily disrupt operations around here . For Black August one of my closest Comrades, Siddique Hasan is accused of organizing Statewide action against the orderly operations of prisons. In the process, this Comrade was placed in the hole, stripped of his personal property and his access to communicate is severely cut back.

Of course he continue to lead, to deeply care about justice for us all even as he fight for justice to keep the State from murdering him. Some of you know the prison rules was twisted up just to find that Hasan broke any rule. He did 3 weeks on hunger strike while many of you made calls demanding fairness.