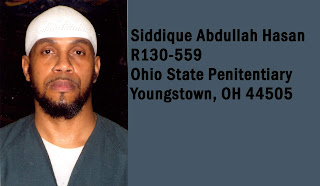 Today is the 11th day of Hasan's hunger strike. We have the following updates on his situation:


1. He finally got the minimum envelopes they are legally required to give him and sent out the conduct report. It is online here or download pdf.

2. Hasan thinks the hearing may be on Thursday or Friday of this week.  He is almost sure he will be convicted. He is able to call witnesses who can call in. We're reaching out to find the people he requested, at least one is ready to testify on Hasan's behalf.

3. He is currently housed in the infirmary and they are requiring him to do medical checks to delay him from accessing his legal counsel. According to Alice Lynd:


4. He is grateful for everyone making support calls. He got mail from supporters. As we anticipated, he wants calls directed to central office, since that's who originated the conduct report. Get details on contacting Gary Mohr and other ways to support Hasan here.

5. The charges he's facing are more serious than in 2016 or other attempts to lock him out of communication, and will be harder to fight. He believes this is a first amendment struggle. ODRC is likely to railroad him and we will need to take the fight to the federal level. Here's a more technical description of the legal stuff.


On July 30, Hasan was told by the lieutenant who is in charge of the Rules Infraction Board that his case would not be heard by the RIB but was being referred to the Serious Misconduct Panel, the members of which are appointed by the regional director.  See AR 5120-9-08.1, Disciplinary procedures for violations of inmate rules of conduct before the serious misconduct panel, available at http://codes.ohio.gov/oac/5120-9-08.1, and Ohio Department of Rehabilitation and Correction, Policy 56-DSC-03, Disciplinary Procedures for the Serious Misconduct Panel, available at http://www.drc.ohio.gov/Portals/0/Policies/DRC%20Policies/56-DSC-03%20Apr%202017.pdf?ver=2017-11-01-083126-567.


The inmate may request witnesses who may testify in person, by phone, or electronically.  As witnesses, Hasan has requested Ben Turk, Steven Kirschenbaum, Queen Tahiyrah, and Abe Bonowitz (in connection with the protest outside the U.S. Supreme Court on June 30, 2018).             Hasan emphasized the magnitude of the situation he is in.  If convicted, he can be subjected to a lot of restrictions.  His access to the phone and kiosk could be limited for a significant number of months... Furthermore, in Hasan’s view, this matter cannot be won within the ODRC.  He regards it as a First Amendment issue and he wants outside support and coverage by the media.