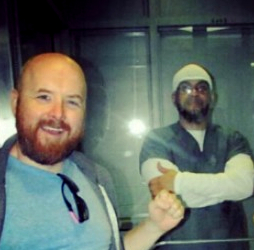 On Wednesday August 8, Hasan ended his hunger strike due to abdominal pain and the need to prepare for his defense before the Serious Misconduct Panel hearing.

News from Staughton and Alice Lynd:

Hasan ended his hunger strike after suffering abdominal pain due to constipation for five days.  He is no longer in the infirmary; he was being returned to his old cell.
He is still in "segregation."  He now has writing materials, envelopes and stamps.  He does not know whether he can have visitors, phone calls, email, or recreation.
He wants his supporters to know that he appreciates all the love and support they have shown.  "I'm good!"


The next step in this ordeal will be the hearing before the Serious Misconduct Panel, which is currently scheduled for Tuesday August 14. We and the Lynds are reaching out to witnesses Hasan has requested to testify before the panel. more details on that:

Hasan was told that his Serious Misconduct hearing would be held on Tuesday, August 14.  He did not know at what time.
According to the administrative rule, the chairman of the Serious Misconduct Panel is responsible to "arrange for the presence of witnesses."  Hasan has asked for five witnesses.
According to the policy for disciplinary procedures, the chairperson may postpone or continue a hearing for a reasonable period of time for "good cause."  Good cause includes "preparation of the inmate's defense."  The SMP policy also says:  "Inmates must have an opportunity to present documentary evidence at the SMP hearing."

Pictured above, Hasan and Ben Turk who was named in the conduct report and hopes to testify at the hearing.