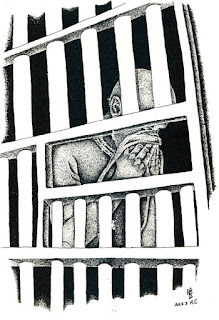 In clear retaliation during the 25th anniversary of the 1993 uprising, the Ohio State Penitentiary administration rolled back communication access and possibly other conditions exclusively for the survivors of the Lucasville Uprising.

Please call Ohio State Penitentiary between 9am and 5pm EST. Dial 330-743-0700 and press 0 then ask to speak with Warden Bowen.

“Hello, my name is _____. I'm calling to demand you reverse Friday's policy changes that imposed new restrictions on prisoners impacted by the Lucasville uprising. None of these prisoners violated any rules and there's no justification for rolling back important policies that help them survive the 25 years of solitary confinement the ODRC has cruelly subjected them to.”


- The policy change seems to have impacted Siddique Hasan, Greg Curry, Jason Robb, Namir Mateen (James Were), Keith LaMar and possibly others. Some of these prisoners were actively reaching out to media regarding the 25th anniversary, others weren't. Some are on special “5A long-timer” status, (something the prison invented to keep them at OSP indefinitely) others are at lower security levels. The common thread is that they're all survivors of the uprising.

-The move took place late Friday afternoon, so that supporters would be unable to call the prison for more information or to reverse the policy until Monday morning.

-Over the weekend, admin assured the prisoners that the restriction would end Monday morning, and was only imposed to prevent them from talking to the public about the anniversary of Lucasville (which is itself a violation of their rights).

-This turned out to be a lie and delaying tactic. Phone and email access was not restored. In fact, the prison showed greater disregard for the prisoner's rights by denying a legal call.

-A new captain on the block has been threatening to return “long-timer” privileges back to “how it used to be”. That might refer to conditions before the series of hunger strikes that won increased contact visitation, phone access, law library, congregate recreation, Jpay kiosk access for email and video visits, and less restrictions on books and music. We're not sure at this time which of these conditions have changed.

-Greg Curry is not on “long-timer” status, but his communication access is restricted. Monday he regained phone access, but still has no email. Last month he was scheduled to transfer out of the institution, then admin canceled the transfer without explanation at the last minute.

-Four of the restricted prisoners (Greg, Hasan, Keith and Jason) are litigants in a media access lawsuit which has been making gains in the courts and has a hearing Wednesday April 25. This restriction may be an attempt to punish or deter the prisoners from suing the ODRC.
at 9:00 PM