Message from Keith Lamar on the hunger strike: 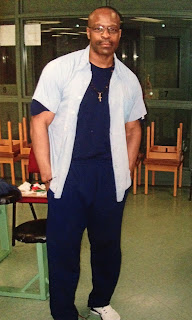 I just met with my attorneys, Alice and Staughton Lynd, along with the warden and North regional director, Mr. Ishee. At present, we're still on strike pending a meeting with the warden, which he assured me would happen "sooner than later." I anticipate it happening in the next day or so. In the meantime, this is my understanding of where things stand:

No one to date has accepted responsibility for rescinding our privileges, but the why and wherefores of that is neither here nor there. What matters is that it not happen again, and I was assured by Mr. Ishee that unless warranted (based on our personal behavior), our privileges would not be summarily rescinded as they were. In addition, there's several issues with respect to visiting and other areas that were already in place before new administration came about, and these things will be discussed with warden in aforementioned meeting. It's my general feeling that these matters will be resolved, and that present problems will not recur again.


To the larger issue of our general situation, we all agree that we cannot rely on the system to deliver the justice we seek. As with the case of our privileges, the only way things will l change is through the utilization of our own agency, and with the support of The People. This lesson is continually being taught to us, and I think we can

accept it as the final solution to our problems. The problem, however, is elevating our situation to the point of having a sitting governor convene a panel that look into our cases and hopefully issue a general amnesty.

It is my view and belief that the only way a general amnesty is seriously considered is if the public demands it; in other words, it has to come about through agitation and the raising of awareness. There's a book about Attica called Blood in The Water that presents, in my opinion, a path to receiving remedy. We need to study this history and situated things in a manner that will reproduce the same results. I am right now awaiting an execution date, and it doesn't matter to me whether I'm lying on a gurney four years from now or four months from now. What matters is that I do it own my own terms, and Hasan and Jason feel similarly. We are here to die; that being the case, we have no qualms about doing it sooner or later.