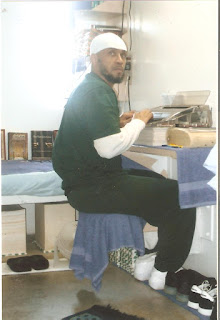 The conduct report described below is here.

They have given me thirty (30) days restrictions. It was a deliberate plan to cut off my direct communications with the outside world prior to the national event/action, notwithstanding their own policy only permits them to suspend my privileges for a period of up to two hundred eighty-eight hours (See paragraph (C) of rule 5120:1-10-12 of the Administrative Code or disciplinary isolation.) This restriction policy became effective 2/16/2016.
I agree that prison officials are "so used to being invisible and hiding its corruption and abuses from the public"; however, we must reveal what happened in my recent situation. Thus continue to work with the media and attorneys to expose the problems in my case. (I plan on filing my appeal to the Warden on Monday.)
There are three of us--Keith Dewitt Jr., David Martin and myself--still on hunger strike. We are all Muslims and are dissatisfied with the contract Imam's work performance, treatment of Muslims, and using his position to remove Muslims from their services merely because they disagree with some of his teachings. The others that were on the hunger strike were showing their solidarity about me being wrongfully put in the hole. They were demanding that I be released from isolation. When that materialized, they ended their strike.
Hereunder are some of the problems in my case:
1. The incident allegedly took place on July 22nd; however, an incident report was not written until August 1st. The charge is very, very serious and no one would wait for 10 days before writing an incident report if it was true.
2. They then waited 8 more days before placing me in the hole (on August 9th) with a conduct report for a Rule 59 violation: Any act not otherwise set forth herein, knowingly done which constitutes a threat to the security of the institution, its staff, other inmates, or to the acting inmate.

3. The above conduct report was dismissed/thrown out and another one was written on 08/15/2016. This was done to embellish and magnify the report.
4. The reporting staff member's signature should appear on the conduct report; however, this is not the case in my situation. Imam Said Ismail's signature is not on mine; instead, Lt. K. Sample signed it. I hear the Imam should have signed it Friday (August 19th), that would be a day after my conviction by the RIB (the Rule Infraction Board). That's unlawful! The written staff member's signature should appear on the report before the RIB hearing is conducted.
5. The RIB has the authority to "Order restrictions on personal privileges following an inmate's abuse of such privileges or facilities or when such action is deemed necessary by the warden for the safety and security of the institution, or the well-being of the inmate. Such restrictions shall continue only as long as it is reasonably necessary." Since I did not violate or abuse any of my phone and/or Kiosk privileges, why am I on 30 days phone and Kiosk restrictions? The simple answer is, they wanted to deny me direct access and communications to the outside world until after September 9th.
6. According to 5120:1-10-13 Violations and penalties, "Major rule violations shall be subject to restriction or suspension of the privileges and/or qualified rights enumerated in paragraph (C) of rule 5120:1-10-12 of the Administrative Code or disciplinary isolation, for a period of up to two hundred eighty-eight hours." That will merely be 12 days of restrictions. So why am I on 30 days of phone and Kiosk restrictions? This policy became effective 2/16/2016.
Not only was my rights to a fair and impartial hearing was violated, the penalty imposed on me was excessive. It clearly shows OSP was out to get me; hence, the reason for the fabricated charge. Even if the Warden or his designee were to refer my case back to the RIB panel for reconsideration when there is procedural errors have obviously occurred, I am convinced the outcome would be the same.
Therefore, let's keep up the pressure and expose OSP's diabolical scheme for all and sundry to see. If we don't, I'm convinced they will eventually fabricate more charges on me in the upcoming weeks, months and years.
Until again, I remain unbroken and in the trenches.
With revolutionary love and salute,
Imam Siddique Abdullah Hasan
P.S.
Share this e-mail with Rick, Jeff, Queen T, and the rest of the world.
at 8:33 AM