Mark your calendar for the next national call-in with Keith LaMar!
When: Monday April 11th at 8 PM (EST)-- the 23rd anniversary of the Lucasville Prison Uprising
Moderator: Dr. Nandi Crosby, sociology professor at Chico State University
Topic: The Economics of Incarceration (costs both inside facilities and to society)

Invite your friends on Facebook: https://www.facebook.com/events/915065541935303/
Dr. Nandi Crosby is a transformative teacher, both at the university level and also inside prison walls. She devotes her life to stirring up dialogue about racial, poverty, gender and sexuality oppression, and is a committed supporter of Keith's. Dr. Nandi does the important work of taking students inside prisons, and has published several books, including, Whispers Over the Wall: Prisoners and Students Correspond in Search of Answers; This Side of My Struggle: Prisoners on Suffering, Surrendering, and Breaking Free (a book of prisoner writings); and her beautiful memoir, If My Soul Be Lost: a Self-Portrait. (http://www.amazon.com/Dr.-Nandi-S.-Crosby/e/B0074GDNZW).

People are invited to use this call-in number: 641-715-3580, access code: 583063 to listen, though they will be muted to allow Dr. Nandi to guide the discussion. During the call (and even before April 11th), questions can be communicated to Keith by sending them via email to: info@keithlamar.com. People can also follow and participate in the conversation via twitter through @FreeKeithLaMar.
at 2:50 PM No comments: 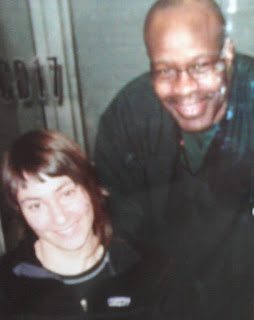 Tonight we hosted an interactive phone conversation with Keith LaMar, people gathered across the country to listen and participate in the conversation between Keith and his friend, Mars Zaineb Goetia (former member of the band Blackbird Raum). They discussed connection with humanity in the age of capitalism, dehumanization of prison, and resistance struggles. Mars is also a single mom, living on the central coast of California and working on radical conflict support within social movements and struggles.

The audio of this conversation is available here.
at 10:46 PM 1 comment:

Keith LaMar Writ of Cert to the US Supreme Court

We expect the US Supreme Court to decide on this matter by March 23rd. After that the State of Ohio will be authorized to set an execution date for Keith. We expect them to add him to the end of the list of people they plan to murder, which is currently a few years long.

During those intervening years we will have the opportunity to file a successor habeus and inadequate assistance of counsel. The former is a last ditch effort to reverse the court's decisions. The latter will replace the court appointed attorneys, who lied to Keith and inexplicably refused to proceed according to his wishes with new counsel, if we can find them. We are looking to build a team of dedicated lawyers who will fight for Keith, and also to raise awareness and pressure on the corrupt judicial system to not allow them to simply railroad Keith again.

Keith's life matters. Exposing and dismantling corruption and hopelessness of what masquerades as a "criminal justice system" in the United States matters.

You can contribute to this fundraiser to help us secure those lawyers, and build that movement.
at 8:18 PM No comments: