Bomani's lawyers filed this petition for an En Banc re-hearing of his appeal. His appeal was heard by three judges from the US Sixth Circuit Court of Appeals.  If the En Banc petition is accepted, all sixteen judges will hear and vote on the arguments.

This is the petition filed by Keith's lawyers.

This is their request for leave to file it.

This is the memorandum itself. 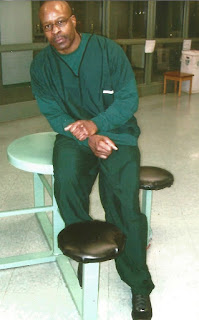 Well, I finally received and read the court’s decision. What can I say? It’s so blatantly bogus that it’s almost impossible to form words to describe how I feel. It’s tragic. I mean, I’ve read the State’s theory quite a few times over the years, and I’ve refuted it every step of the way. But to now have it stand as the final word on the matter is a real slap in the face (to say the least). This system is such a joke, and these people, with their fancy titles and fancy robes, are nothing but a bunch of racist idiots with power—a power that they don’t deserve. And I’m expected to continue this charade by filing this or that motion, writing to this or that person, as if appealing to these people’s supposed conscience really means something beyond reducing me to a sniveling fool. I’m done with that. I’m done pleading and begging for my body, as if “my life” is something that they can truly take. My life is the sum total of all the thoughts and feelings that reside inside my mind, and they can never touch that.

We’ve given these people (?) way too much power over us, entrusted them with too much that is too precious, only to have them use, abuse and confuse us over and over again. Why? Why do we continue to believe in this dream, this lie that we live in a post-racial society that recognizes only human beings? When will we ever wake up and see that all they have ever done is hide what’s real by revealing what’s false? I mean, contradiction after contradiction, and we swallow it all. Why? And this is how we’re expected to live our whole lives: watching little boys get gunned down at the playground for playing with toy guns—and no one is held accountable. How is that justice? A man standing on the sidewalk selling cigarettes (in the richest country in the world, no less) is murdered in broad daylight, on video, for everyone to see—and still no one is held accountable. And I’m supposed to be shocked and surprised that I lost my appeal? Let’s get real. They’ve been killing niggers for centuries around here—hanging ‘em, burying ‘em, tar and feathering ‘em. . .  And ain’t I just a nigger, a THING? No? Well, tell that to the Supreme Court who, in 1875, declared that Dred Scott could not sue for his freedom because HE WAS NOT A PERSON, BUT PROPERTY. Better yet, tell it to Eric Garner’s family who, instead of receiving justice for their loss, were given a bag full of money to bury their grief, as if he was some kind of farm animal. Make no mistake: when it comes to the so-called “justice system” in this country, we’re still stuck in the 1800s; the only thing that has changed is the vantage point from which we view what we choose to see. So look closely, adjust your scope, and you’ll see the tree and the rope. They’re still hanging niggers in America!