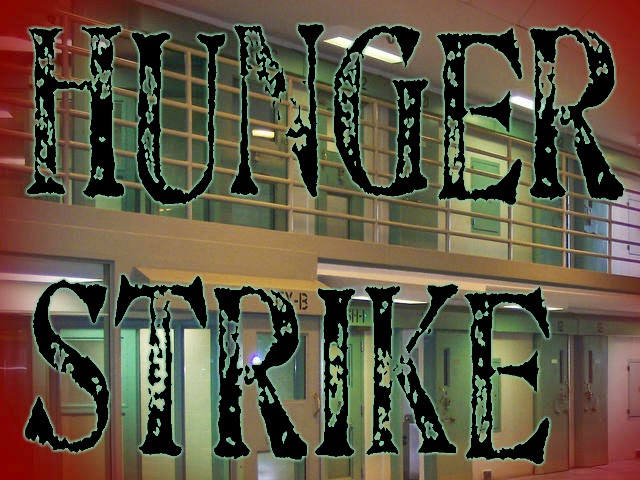 [to support the hunger strike, please see this post for directions to call ODRC director Gary Mohr and the CIIC]
Sixteen days after starting their hunger strike, eight remaining hunger striking prisoners at OSP have been moved into cell block D, where they are isolated from the rest of the prison population. Our contact at OSP, Siddique Abdullah Hasan says the only reason he can imagine for the transfer is to isolate the prisoners and make sure no one is passing them food. "I told the guys its a bad idea to do that anyway, you're better off letting your stomach shrink while on hunger strike" Hasan explained.

In addition, the prison authorities have been giving out inaccurate information. According to a letter to Rick Kerger, a lawyer and advocate, from Stephen Gray, Chief Counsel for ODRC the 5B prisoners are "still receiving individual programming cell front, [which we've described here] through their televisions, and out-of-cell when necessary." (emphasis added) We're not sure if Gray has been misinformed by OSP staff, or if he's intentionally lying to Kerger, but Hasan has not heard about the option for out-of-cell programming. The normal procedure for policy changes at OSP is to post them, either on paper or via the televisions, and there has been no such posting indicating that 5B prisoners can get out-of-cell religious programming. Mr Kerger also wrote legal services people requesting a conference call with him, a lawyer from the Center for Constitutional Rights, and other prisoner supporters, but that letter was ignored.

Also, if OSP wants to change or clarify the policy they should start with informing the prisoners who have been starving themselves for over two weeks to protest the policy, not in a letter to outsiders. This has not been OSP's approach. Still after sixteen days Ms Bracy, the deputy warden of operations (second in command at the institution) has not spoken with each individual prisoner to understand their demands. When she spoke with Hasan she asked if he was the leader and he told her that he was not. He spoke only to his grievances, and encouraged her to visit the others to know what their issues are. She has not been back to talk to Hasan or any of the prisoners since the third day of the hunger strike, when after nine skipped meals, the hunger strike became official.

This disrespectful lack of communication with hunger striking prisoners appears to also be a change in standard procedure at OSP. Under previous wardens hunger strikes were taken seriously and the administration worked with prisoners to negotiate a reasonable solution to their needs. Warden Forshey doesn't seem to think this is necessary, and is instead isolating the prisoners in an apparent attempt to break their resolve and force them to accept these unacceptable deprivations as the new normal.

Hasan acknowledged that the administration did handle the transfer professionally. As far as he knows none of the prisoners were mistreated and all of their property was intact when returned to them in the new cell block. This unusual care (shakedowns and transfers are often uses as opportunities to mishandle and damage prisoner property) seems to indicate that our call ins and oversight have been effective.

Once transferred to cell block D, Hasan observed that one of the safety issues he has raised about the showers in C block is unique to that block. Months ago the mats were removed from the stainless steel showers in C block, because they were allegedly breeding flies. The removal of these mats creates very slippery conditions in the showers, which has resulted in more than one serious head injury from prisoners falling. On March 19th Ms Bracy assured Hasan that they had ordered velcro type strips to lay down in the shower as a replacement for the mats. She told him the strips had arrived a few days ago, and just weren't installed yet. As of today, at least eleven days after these safety strips arrived at the institution they still were not installed.

Now that Hasan and the others were transferred to D block, they've observed that the same mats that were removed from C block were not removed from the D block showers. Hasan suspects that unit manager Wolfe, who seems to pride himself on being a tough guy is responsible for this discrepancy and possibly the delay in installing the velcro safety strips in the showers.

Hasan and the hunger strikers have also complained about the decreasing food standards at OSP since private corporation Aramark took over the food service. Aramark is cutting costs by making hard flavorless biscuits and calling them pancakes, or "veggie burgers" made of little more than the paste of mashed up black beans. It seems that Aramark is feeding prisoners substandard meals across Ohio and around the nation.

OSP staff does not know whether some of the hunger striking prisoners include improvements in food quality as part of their demands to end the hunger strike, because they have not found time to visit and talk with each of the hunger strikers. They also have not found time to install safety measures in the showers. But have found the time to shake down eight cells and move the guys with all their property to another wing of the prison. It is clear what OSPs priorities are: punishing and breaking the prisoners who are only standing up for their rights and the minimum of decent treatment.

We have begun to suspect these policy changes are not about the violent incidents that OSP is using to justify them. Like outsourcing food service to Aramark, the priority seems to be cutting costs and reducing the budget. Religious staff at OSP has been reduced prior to these changes, and these changes will allow them to cut further. OSP is a very expensive institution to run, but the idea of cutting the budget by imposing austerity on the prisoners, taking away what little privileges or human contact they have in that highly controlled environment is offensive. If the ODRC wants to save money, it should close OSP down entirely and find a more humane way of maintaining order in their institutions.
at 7:47 PM