Report Round Up for Oral Arguments

This post will link to all the things we know of relating to the Oral Arguments.

Full audio of the proceedings is online here.

Howard Tolley, a former 6th Circuit Clerk who knows what he's talking about wrote this summary of the arguments.

Ben Turk who knows Keith's case and what a nervous prosecutor looks and sounds like, but not so much about the law wrote this summary.


The most thorough info on Keith's story and situation is in his documentary and book, both entitled Condemned.


The best way to keep up to date on anything relating to Keith's struggle is his Facebook page.

A more in-depth interview on The Final Straw.

San Francisco Bay View did this article in advance of the date.

Hundreds of Supporters Rally Outside Courthouse - Lucasville Amnesty
at 4:40 PM No comments:

Really excellent short interview with Keith on Prison Radio. Please give it a listen.

Reportback and Thoughts on Next Steps by Ben Turk

Over one hundred friends, family and comrades of Keith LaMar (aka Bomani Shakur) gathered in the 6th Circuit district court Tuesday afternoon. We counted 90 packed like sardines on the benches of a "capacity: 60" court room and at least 15 in the audio-only overflow room upstairs. We all came with two purposes: to bear witness, and to show support. Due to the egregious injustice of the US legal system, the condemned man is not allowed to hear the oral arguments of his appeal himself. So we showed up for him.

Howard Tolley is a University of Cincinnati professor and former clerk at the 6th Circuit court. This is his summary of what went down during the oral arguments...


Over 80 supporters of Keith Lamar including a busload from Cleveland bore witness in Courtroom 403 and an overflow room of the 6th U.S. Circuit Court of Appeals during oral argument Tuesday December 2.  The compelling, pre argument, 130 page brief submitted by his attorneys can be found here.

A panel of three judges, Eric Clay a Clinton appointee and two Bush appointees, John Rogers and Raymond Kethledge posed challenging questions to Keith’s attorney David L. Doughten who responded effectively that the prosecutor’s withholding of exculpatory evidence violated constitutional guarantees of due process.  Although other members of the Lucasville five have now received the witness statements Keith needs, his representatives are still the victims of a mix and match game with a prosecutor’s summary of their statements and a separate list of names unconnected to what each said.

These are informal notes taken by a supporter. The hearing progressed quickly and was filled with legal jargon and case citations, so these notes are incomplete. Bomani Shakur's state name is Keith LaMar. Throughout these notes where “Bomani” shows up, “Keith LaMar” or “Mr. LaMar” was said in court. I wrote “Bomani” cuz fuck the state. The notes include the judges' questions and comments, but I wasn't able to record which judge said/asked what. I also include some comments on the context and indications of where my notes are incomplete in brackets. 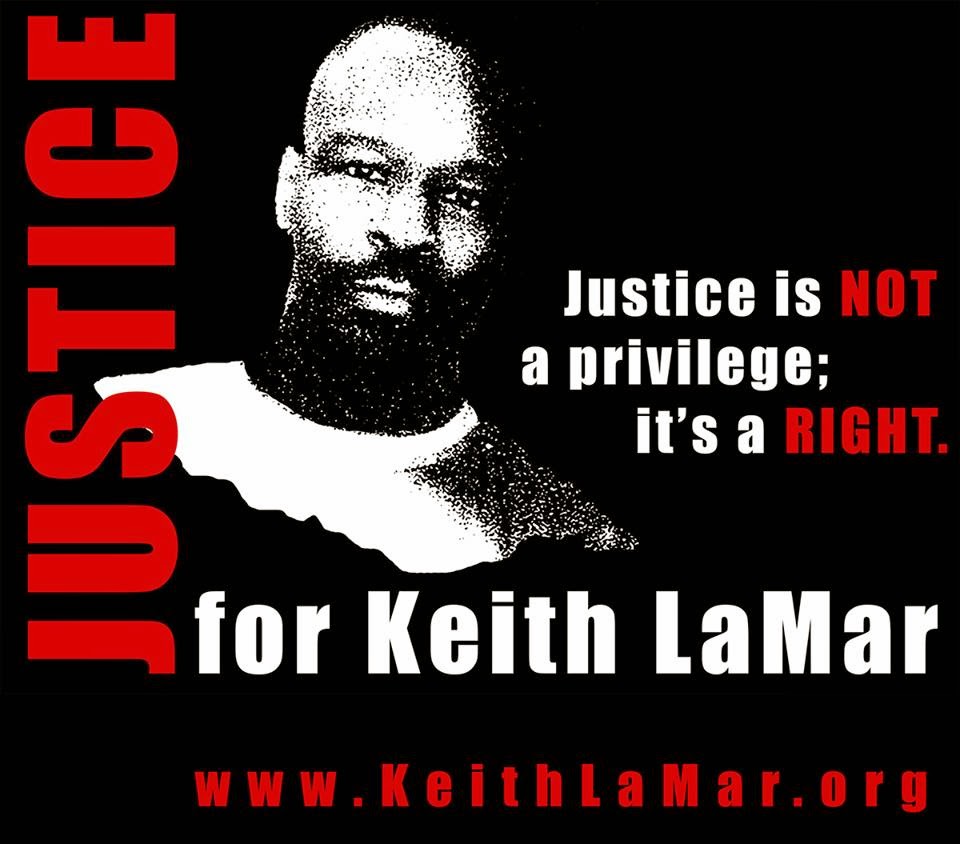 The Final Straw on Asheville FM did an interview with Keith LaMar a few weeks back, and they're airing it now leading up to the oral arguments on his appeal.

Rally and Court for Keith LaMar

HUNDREDS OF SUPPORTERS RALLY OUTSIDE COURTHOUSE

Supporters of death row prisoner Keith LaMar will gather for his final legal appeal in downtown Cincinnati on Tuesday December 2nd. New evidence demonstrating his innocence has recently surfaced, and was deliberately withheld in his original trial. Supporters say LaMar has been held in solitary confinement for over 20 years for crimes which prosecutors knew he did not commit.

What: A rally immediately preceding the Oral Arguments for Keith LaMar's final legal appeal. Family, clergy, and community members from across the state will gather to pray, sing, and speak about LaMar and his case.

Why: Over the past 20+ years, Keith's story, persistence, and intelligence have mobilized scores of supporters. Accomplished author and professor Denis O'Hearn says "Keith has a compelling defense against the capital condemnation he has endured at the hands of a system that is not just broken, but actively made not to work." A book and movie released earlier this year, both named "Condemned", have newly demonstrated his innocence and publicized his case.

Visuals: "Justice for Keith LaMar" banner, signs, t-shirts, speakers, and crowd of supporters; speeches, singing, and orderly procession to the Courthouse.
at 6:12 PM No comments: