The second essay in Staughton Lynd's new series, leading up to the 20th Aniversary Conference of the Lucasville Uprising in April of 2013. Reviewing this background page and this timeline might help provide a context and more general understanding for the detailed information contained in Staughton's essays.

What Caused the Uprising?

History books often contain a chapter that tries to answer the question:  What caused such-and-such a revolt or revolution?
For example:  What caused the “Boston Massacre” in 1770 when British troops stationed in Boston fired on a crowd that was pelting them with frozen snowballs and oyster shells?  What caused the “Boston Tea Party” of 1773 when chest after chest of tea imported from was thrown into harbor?  (Hint:  There had not been a new tax.)  What caused the beginning of actual warfare at and on ?
The truth is that it is very difficult to be sure why human beings suddenly throw caution to the winds, and, knowing that there may be enormous consequences, take a stand and risk everything.   Unsure as to the real causes of a rebellion, the historian may take refuge in a chapter title like “The Gathering Storm.”
Let’s see if we can do better regarding the causes of the longest prison uprising in history in which lives were lost, at the Southern Ohio Correctional Facility (SOCF) in Lucasville, .

What the Prisoners Themselves Said

Before, during, and after the eleven days, the prisoners in rebellion had no obvious way to tell their side of the story.

On the first full day of the L-block occupation, Monday, April 12, prisoner Anthony Lavelle improvised a public address system to broadcast the prisoners’ demands.  The authorities thereupon turned off electric power in L-block.  The prisoners responded by writing their demands on bedsheets and hanging the sheets out of windows in the occupied pods.  (See Exhibits 3 and 4.)  These lists of what the prisoners wanted appear to provide the best evidence of the causes of their rebellion as perceived by the prisoners.
The bedsheets presented the following demands:
∙  No petty harassment, walking in crowded groups behind yellow lines, forced to wear ill-fitting clothes, haircut standards applied at a whim of officers.  Arbitrary rules created to appease an officer’s anger.
∙  Medical treatment that fits the medical guidelines, many people here are given aspirins for serious medical problems.
∙  Agree not to destroy personal property.
∙  No more forced integrated celling. 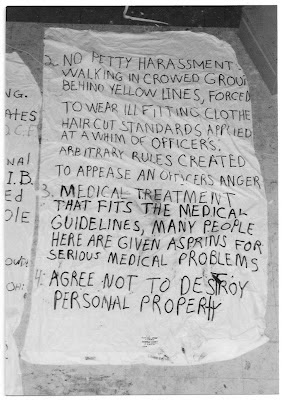 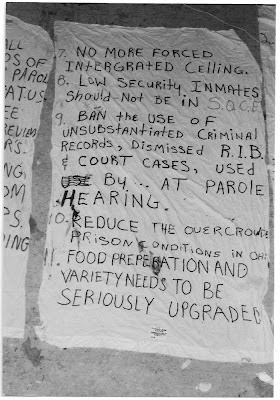 ∙  Low security inmates should not be in SOCF.
∙  Ban the use of unsubstantiated criminal records, dismissed R.I.B. and court cases . . . at parole hearings.
∙  Reduce the overcrowding.
∙  Food preparation and variety needs to be seriously upgraded.
∙  [You are] locked in a cell with another inmate you can’t get along with.
∙  Education programs have been so diluted as to only accommodate those of a lesser security.
∙  Phone calls to be able to speak to their families other than 5 minutes at Christmas.
∙  Mail and visiting [policies] are arbitrarily applied.
∙  No rep[risals] against any inmates.
∙  No selection of supposed leaders!
∙  Medical personnel for the injured.
∙  Reasonable pay per work assignments.
∙  Abolish unit management, also security status ratings (Max 3 & 4).
∙  Complete overall review of records of all inmates for parole and transfer status.
∙  Inmates’ committee needed for cross review with staff overseers.
∙  Ideal programming, outside help from statewide groups.
∙  If peaceful ending [to the uprising], cameras present when officers enter.
In trials held after the negotiated surrender, prisoners involved in the uprising continued their efforts to explain why they had rebelled.  As I describe in my book Lucasville (2nd edition at pages 156-159), the most determined effort to introduce such evidence came in the trial of the alleged leader of the disturbance, Hasan.
The judge at Hasan’s trial was a former prosecutor.  The outrageous bias evident in his rulings included the following:
First:  The judge permitted prosecutors to say in Opening Statement:  “This riot was the idea of one man.  This riot was planned by one man.  This riot was organized by one man,” and in Closing Argument:  “Whose riot was this? . . . Who called for this riot? . . .  Ladies and gentlemen, first and foremost, without question this was his [Sanders’] riot.”  Yet when Warden Tate testified and defense counsel tried to question him about prison conditions that caused the riot, Judge Cartolano barred that line of questioning, stating:  “This is a murder case.  It has nothing to do with the riot, except that it happened in a prison at the time of the riot.”
Second:  The defense team was anxious to show that an alternative means of testing for TB had already been used at Mansfield Correctional Institution and to this end called a prisoner named Frederick Crowder.  Judge Cartolano refused to let Mr. Crowder testify, opining:  “This case is not a case concerning the riot. . . .  The justification or the necessity or the wrongness of the riot is irrelevant. . . .  I don’t care what they did at concerning a TB testing.  It is irrelevant.”
Finally, and most revealingly, Judge Cartolano refused to permit testimony during the sentencing phase of Hasan’s trial by an expert witness named Joseph R. Rowan.  Mr. Rowan is an authority on prisons who has testified as an expert in 150 trials.  He was prepared to testify that “it is highly likely this riot could have been prevented.”  The judge forbade Mr. Rowan from testifying, declaring that “riots are not created by the prison.   Riots are created by the inmates.”
To be sure, maximum security prisoners at SOCF in 1993 are not precisely comparable to the well-to-do gentlemen in wigs and knee britches who assembled at Carpenters Hall in summer 1776 to declare independence from .
But there are similarities.  Prisoners in L-block might well have said, as does the Declaration of Independence:
Prudence, indeed, will dictate that Governments long established should not be changed for light and transient Causes; and accordingly all Experience hath shown, that Mankind are more disposed to suffer, while Evils are sufferable, than to right themselves by abolishing the Forms to which they are accustomed.
But, it was said in 1776, and could also have been said in 1993:
When a long Train of Abuses and Usurpations, . . . evinces a Design to reduce them under absolute Despotism, it is their Right, it is their Duty, to throw off such Government, and to provide new Guards for their future Security.